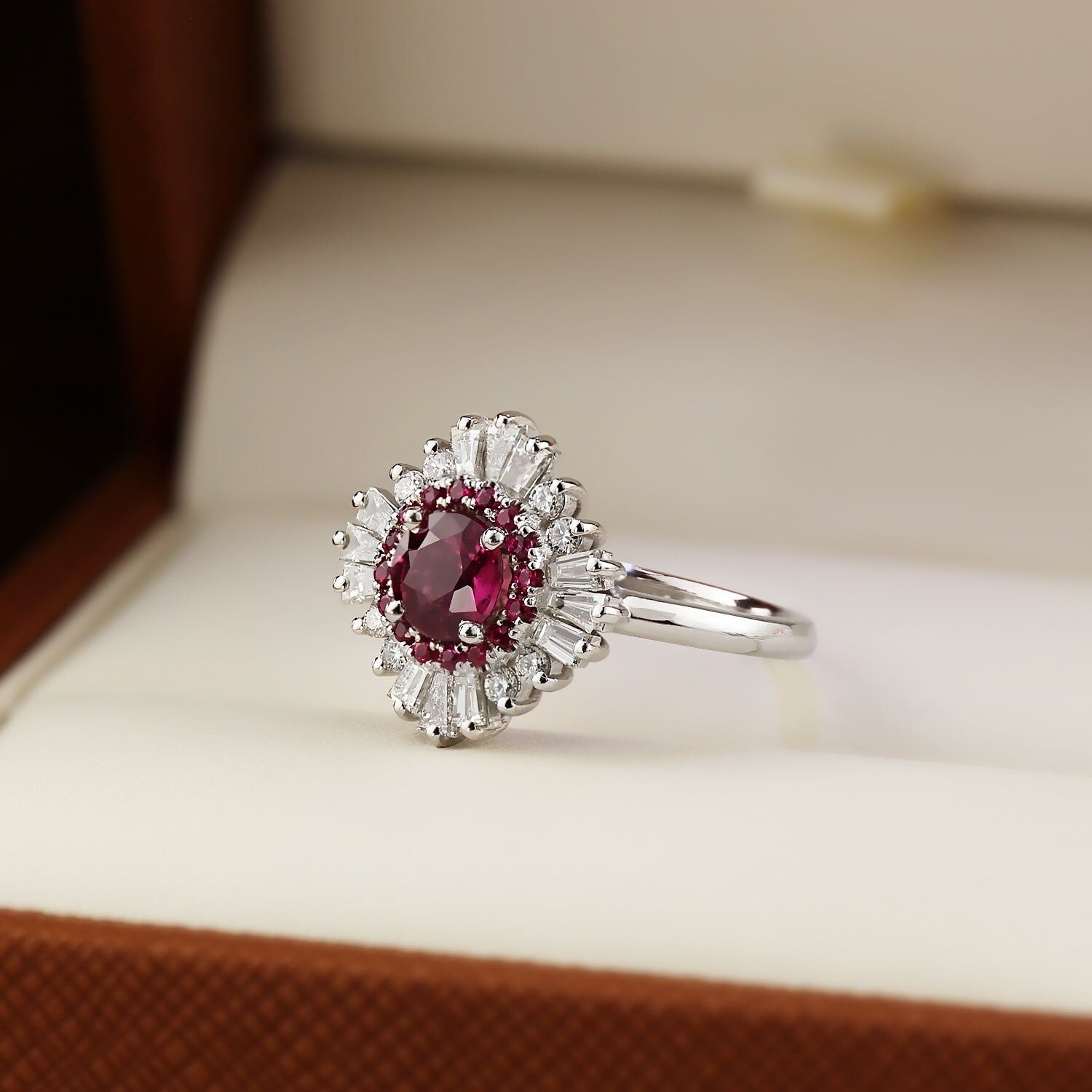 The Charleston Ring showcases a beautiful ruby in a unique, antique-style halo setting that’s fit for a queen.

If you’re a July baby, you’re lucky to have the regal ruby as your birthstone. Throughout the ages, rubies been prized for their incredible red color and their powerful meaning. In various cultures, rubies have been thought to bring their wearer passion, love, energy, health, and power. Want to know more about July’s birthstone history? In this post, we’re telling you the history of the ruby and highlighting some of our favorite ruby engagement rings along the way!

The History of The Ruby

Rubies take between 2 and 3 million years to form in the earth’s crust, so they’ve been around since before the dawn of humanity. Rubies actually have the same development time as sapphires since, technically, they’re the made of the same mineral as sapphires. Rubies and sapphires are both made of corundum. So what’s the difference between the two? When rubies form, they’re exposed to chromium, which gives them their unique, breathtaking red color.

Ruby deposits have been found in many places in the world, including Myanmar, Thailand, Srilanka, Cambodia, Pakistan, Madagascar, Kenya, Maloui, and Tanzania.

Rubies have been loved by people since they were first discovered in ancient times. We know this because rubies were mentioned in many ancient historical texts, including in the Bible (there are actually four mentions of rubies in the Bible) and in the Roman scholar Pliny’s Natural History.

Rubies have been valued in both Eastern and Western Culture. The ancient Sanskrit word for ruby is “ratnaraj,” which means “king of precious stones.” In ancient India, it was thought that rubies allowed their wearer to live in peace with their enemies. In the western world, European royalty has always favorited rubies. Medieval Europeans believed that rubies brought their wearer wisdom, good health, money, and love.

Rubies in Antique and Vintage Eras 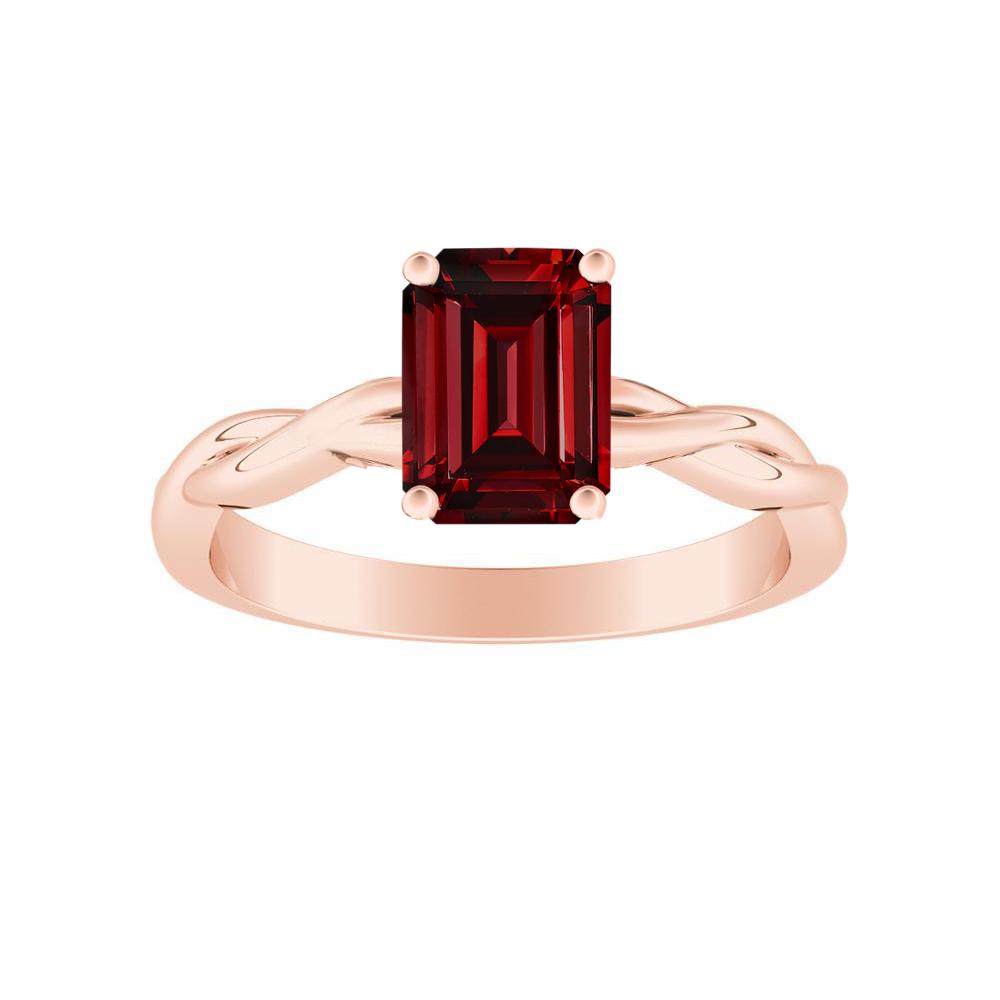 The Elise Ring has a retro-era vintage style, thanks to its twisted rose gold band and glamorous emerald cut center ruby.

Rubies look at-home in antique and vintage designs, as the richly red ruby was very popular throughout the 19th and 20th centuries. You’ll find that many vintage and antique era engagement rings feature gemstones such as rubies, as diamonds only became the most popular choice for engagement rings in the mid 20th century. 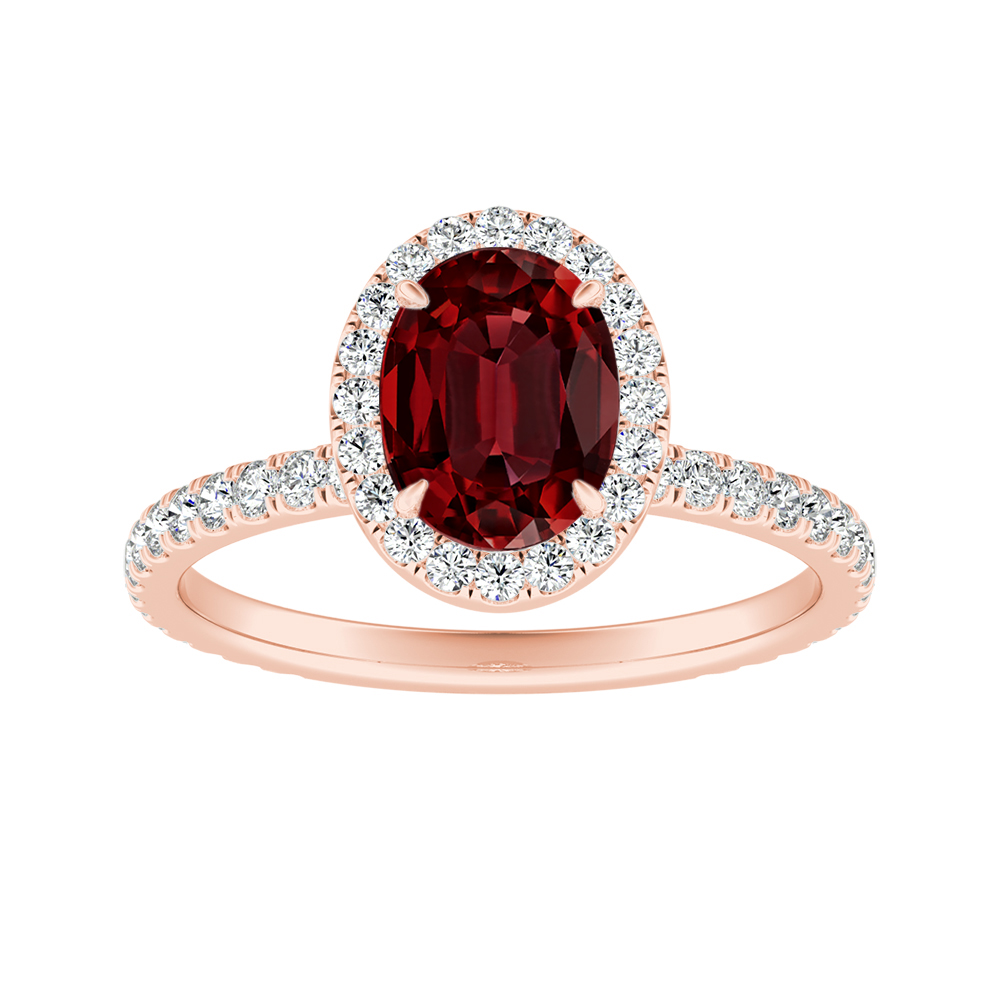 Rubies are just as valuable in modern times as they have been throughout history. Today, rubies are a popular choice for luxurious fashion jewelry and unique engagement rings. The high durability of rubies makes them an excellent choice for an engagement ring. Rubies rank at a 9 out of 10 on the Mohs scale of harness, which means that only a diamond is harder than a ruby. The lovely meaning of rubies (which are thought to bring their wearer love, passion, and protection) also makes them particularly appropriate for engagement rings.