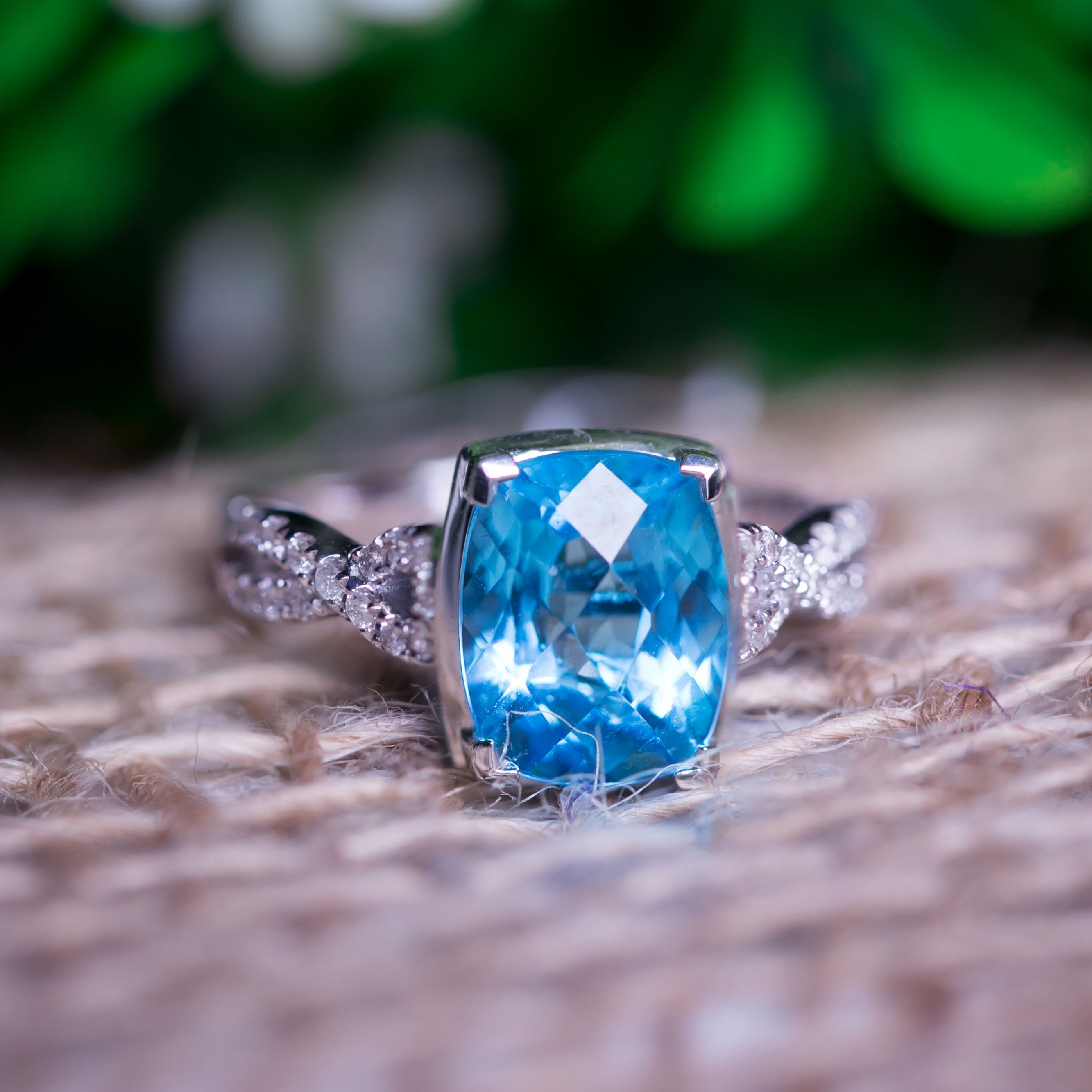 They say that wearing your birthstone can bring good luck. And if you were born in December, your lucky birthstone is the beautiful, shimmering blue topaz! In addition to being beautiful, blue topaz is also meaningful. Today and throughout the ages, blue topaz has been a symbol of love, peace, joy, and much more. In this post, we’re celebrating the beautiful blue December stone by taking a closer look at this gem’s history and many deep meanings. Then, we’ll also close out this post with some handy tips on how you can care for your blue topaz birthstone jewelry!

The History and Make Up of Blue Topaz 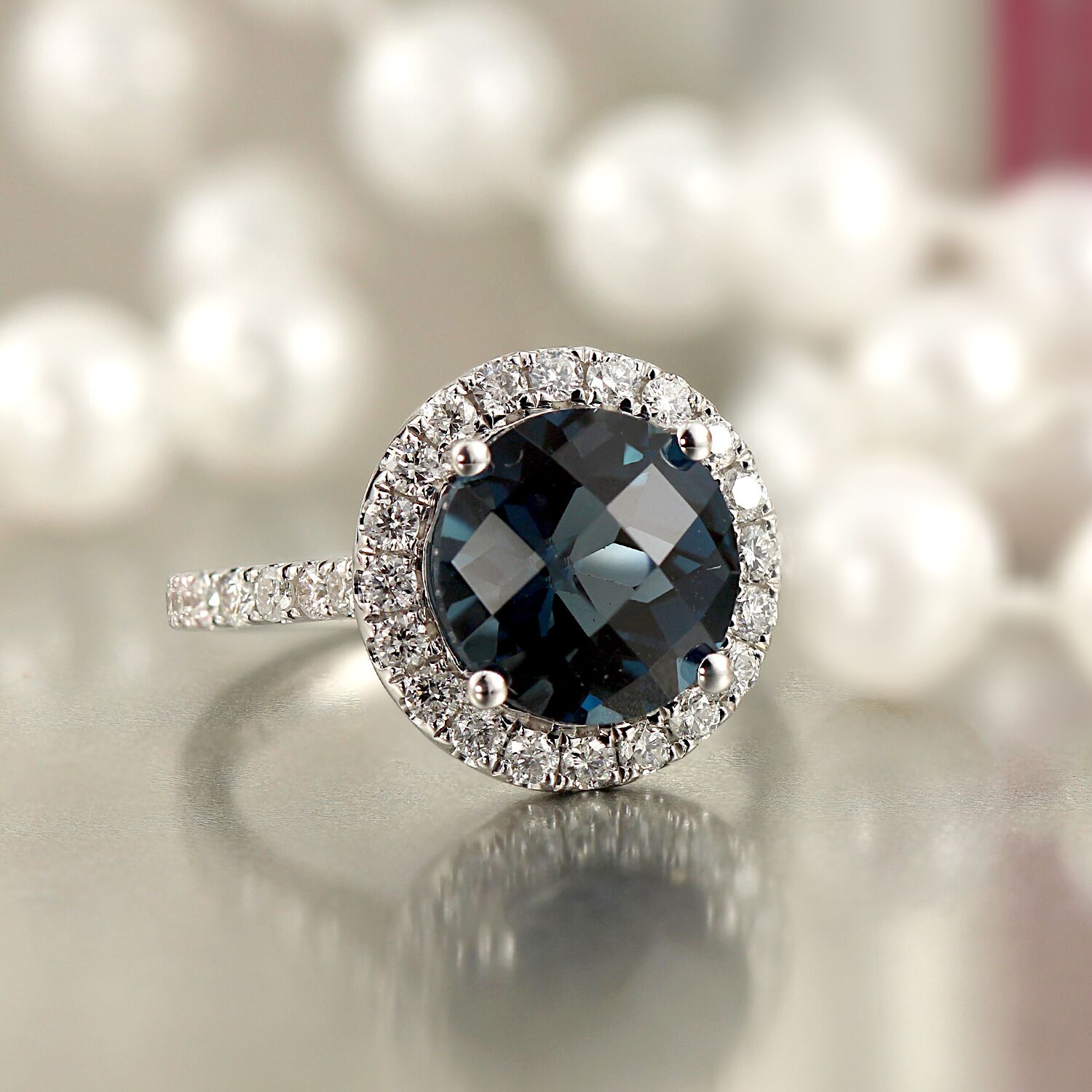 Blue topaz is a variety of topaz, which comes in many hues. Most historians agree that the name topaz comes from Topazios, the ancient Greek name for an island in the Red Sea that is now known as Zabargad. Despite this gemstone’s namesake, Topazios Island was never actually a source of topaz. Topazios was instead a prominent producer of peridot, a gemstone that was often confused with topaz in the past.

Topaz is formed when fluorine vapors interact with igneous rocks during the crystallization process. While topaz can naturally form in many colors, including blue, evenly and vibrantly colored topaz is quite rare. So most of the topaz sold today in jewelry has been heat treated to improve or change its color.

The Meaning of Blue Topaz 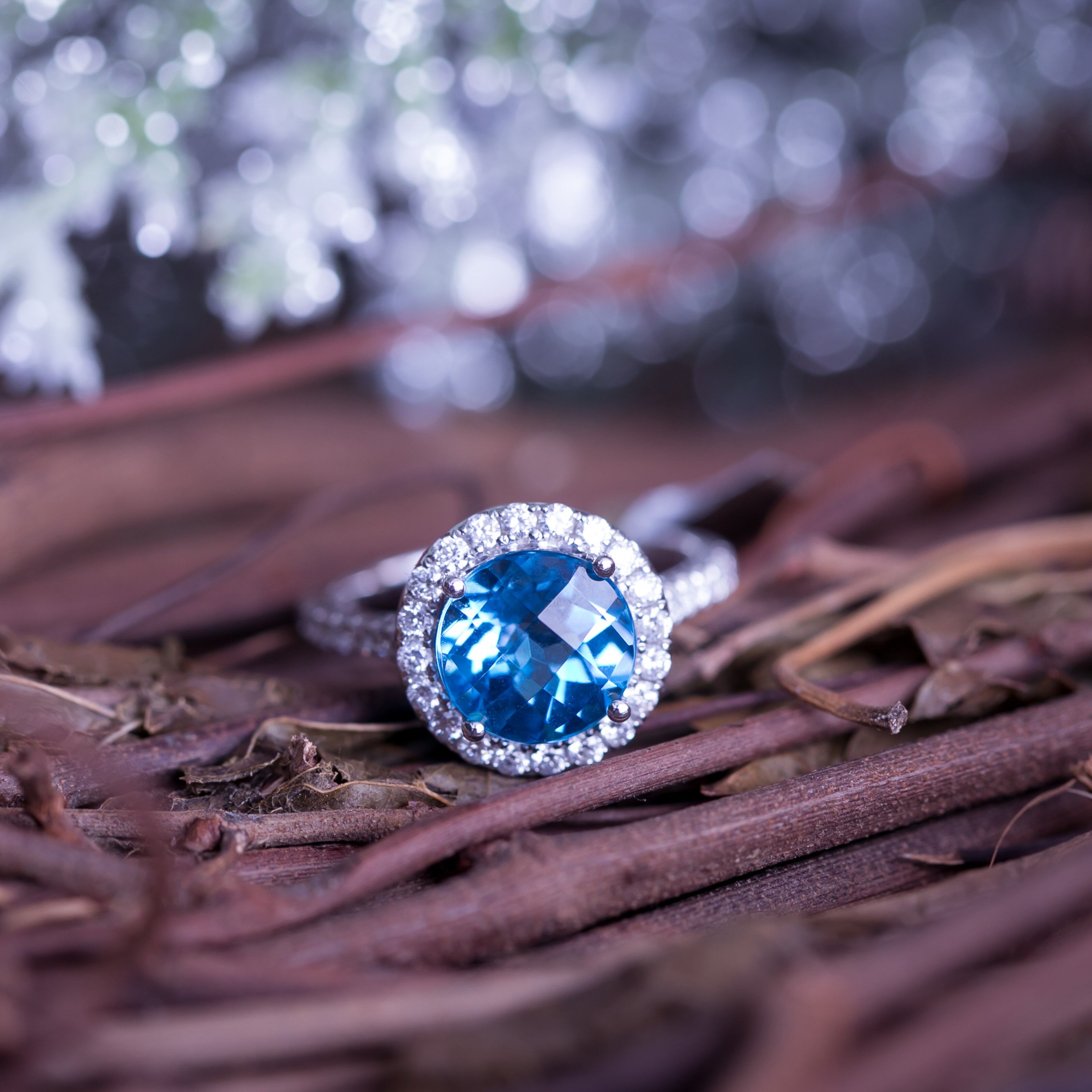 A stunning Swiss round blue topaz mesmerizes and captivates in a dazzling halo setting.

Blue topaz has had many meanings (and has been associated with many properties) throughout time. In ancient Greece, people believed that topaz brought strength to the wearer. Then, ancient Romans associated topaz with Ra, the Roman god of the sun who was known as the giver of life. In Europe during the Renaissance, people believed that topaz could dispel anger and that it had to the power to break magic spells. And for hundreds of years in India, people thought that when you wore a topaz above the heart, the topaz would bring beauty, intelligence, and a long life to the wearer.

Today, blue topaz is most commonly known as the December birthstone and it is also the traditional gemstone gift given on a couple’s 4th anniversary. In modern times, blue topaz is known as a stone of love, peace, and joy, and it is also strongly associated with calming the mind. Crystal healers of today say that wearing a blue topaz can improve self-confidence, help one think through complex ideas, calm the emotions, and aid in meditation.

How to Care for Blue Topaz 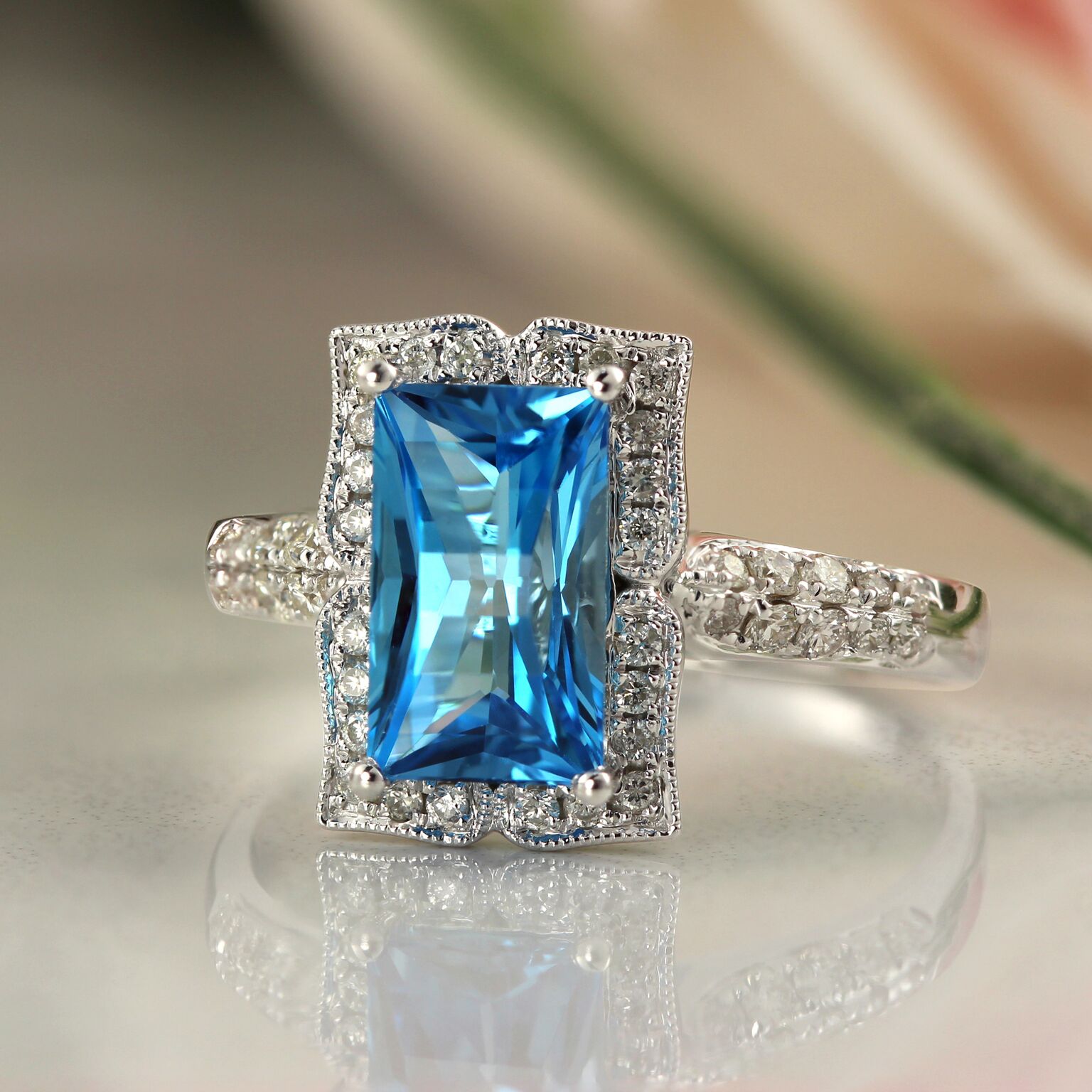 Blue topaz is a beautiful blue gemstone that is excellent for daily wear in jewelry. Some of the most popular ways to wear blue topaz include in engagement rings, cocktail rings, pendant necklaces, and earrings. But if you have a blue topaz piece, how should you care for your blue topaz jewelry to keep it looking beautiful day after day?

Luckily, blue topaz is a fairly hardy gemstone. Gemstones are ranked on a scale called the Mohs scale of hardness. On this scale, diamonds are the hardest of all gemstones with a rating of 10. However, topaz isn’t far below the diamond with its rating of 8. Because topaz ranks high on the Mohs scale, it’s fairly resistant to scratching. However topaz can still break if it is it hit, so be wary of wearing a blue topaz piece when it could get struck (like when working out, playing sports, or using heavy tools). You should also be wary of wearing topaz in extreme temperatures, since topaz is sensitive to both very cold or very hot conditions. Extreme temperatures can cause topaz to change color, get damaged, or even break.

With all that said, topaz is generally an excellent gemstone for daily wear. However, all gemstones can get a bit dirty with regular wear. When we wear jewelry, the gemstones in our jewelry can slowly get covered in a film made up of dust, dirt, and our skin’s natural oils. Then, things like moisturizing lotions, soaps, or conditioners can also cause build up on gemstones. But if you find that your blue topaz jewelry is starting to look a bit dull or dim, you can easily remedy this with an at-home cleaning or a professional cleaning.

How to Clean Blue Topaz Jewelry At Home

To clean blue topaz jewelry at home, use the soap and water method outlined below.